I share the unanimous opinion of those who have congratulated you for your brilliant, valiant speech on the night of December 6, as soon as the election’s outcome was announced

In world history, the highest level of political glory which a revolutionary can reach, is that of the illustrious Venezuelan combatant, Liberator of America, Simón Bolívar, whose name now belongs not only to this sister country, but to all peoples of Latin America.

Another Venezuelan official of honorable legacy, Hugo Chávez, understood and admired him and struggled for his ideas until the last moment of his life. As a boy, attending elementary school in the country where the poor children of Bolívar were obliged to work to help support their families, he developed the spirit in which the Liberator of America was forged.

The millions of children and youth who today attend the largest and most modern system of public schools in the world are Venezuelan. More can be said about the country’s network of medical care centers and the attention paid to the health of its people, brave but poor as a result of centuries of plunder by Spanish colonialism, and later by huge transnationals, which for more than 100 years extracted from its entrails the best of the immense oil reserves nature bestowed on this country.

History also bears witness that workers exist, and make possible the enjoyment of nutritious food, medicine, education, security, housing and the world’s solidarity. You could ask the oligarchy, if you like: Do you know all of this?

Cuban revolutionaries – just a few miles from the United States, which always dreamed of taking possession of Cuba to make it a hybrid casino-brothel, as a way of life for the children of José Martí – will never renounce their full independence or respect for their dignity.

I am sure that human life on Earth can only be preserved with peace among all peoples of the Earth, and acknowledgement of the right to make the planet’s natural resources common property, as well as the sciences and technologies created by human beings to benefit all of its inhabitants. If humanity continues along the path of exploitation and the plunder of its resources by transnational’s and imperialist banks, the representatives of states meeting in Paris, will draw the relevant conclusions.

Security does not exist today for anyone. There are nine states which possess nuclear weapons. One of them, the United States, dropped two bombs which killed hundreds of thousands of people in just three days, and caused physical and psychological harm to millions of defenceless people.

The People’s Republic of China and Russia know the world’s problems much better than the United States, because they were obliged to endure the terrible wars imposed on them by fascism’s blind egoism. I do not doubt that, given their historical traditions and their own revolutionary experience, they will make the greatest effort to avoid a war and contribute to the peaceful development of Venezuela, Latin America, Asia and Africa. 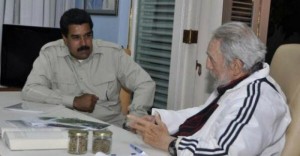 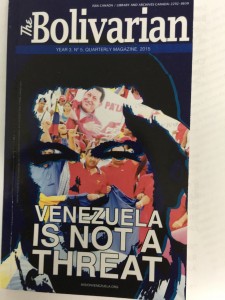 Under sharp questioning by reporters at a daily press briefing on March 10, 2015 – one day after Barack Obama’s Executive Order against Venezuela – U.S. Department of State spokesperson Jen Psaki declared, “The goal of these sanctions is to persuade the Government of Venezuela to change their behavior.”1 Is the only concern the Government of Venezuela’s behavior? Since December 1998, when Commander Hugo Chávez won the presidential elections, and now under the leadership of President Nicolás Maduro, the main characteristic of this behavior has been to develop new experiments in participatory democracy. This means the political power of the people exercised in daily concrete actions and political thinking. The fresh projects of participatory democracy displace representative democracy, whose main feature is to restrain people at the base so that they rely on elected representatives. Participatory democracy has been progressively resulting in the fusion of elected representatives at all levels, including government leaders, into the daily political, social and economic life of the people. It is now increasingly difficult to distinguish leadership from the grass roots. Thus, the primary concern of the Obama administration is that the Bolivarian Revolution is a real revolution in which the main protagonists are the people themselves. Concentrating on the behavior of the Government of Venezuela is, in fact, just a smokescreen to cover up the fact that the revolution being developed is not from the top down. This revolution has succeeded where others have failed, that is, it promotes a dialectical relationship between the top down and the bottom up. The Bolivarian Revolution represents a revolution in political culture: its main feature is that people are their own liberators, and this can only be realized if exercised on a daily basis; there is no easy way out. The Venezuelan people are increasingly aware of this. This is Obama’s real concern with regard to the conduct of the government: the U.S. is not facing merely a government, but a revolution that becomes stronger and more mature as it defends itself. This is not to say that setbacks cannot and will not take place. This is bound to happen as Venezuela is evolving in a very complicated situation whereby the U.S. government and the international media are targeting Venezuela. However, the Bolivarian Revolution has become a material force that can be detected, as I have noticed during my visits to Caracas. I am convinced that it cannot be destroyed.

Its vibrancy, as exhibited now in the heat of the battle, serves as an example to other countries, especially in Latin America and the Caribbean. In this region, the most dynamic in the world today, alternative media such as Telesur and the use of social media allow the people in the area to follow events and reach their own conclusions for their respective countries. Therefore, one cannot underestimate the potential positive impact of the Venezuelan experiment on other countries. This is the first of Obama’s real concerns regarding Venezuelan behavior, thus the attempt to drive a wedge between the government and the people.

What is the second concern? In 2011, Obama stated that “even if we tap every single reserve available to us, we can’t escape the fact that we only control 2 percent of the world’s oil, but we consume over a quarter of the world’s oil.”2 Today, Venezuela has the biggest certified oil reserves in the world. The problem is that the U.S. cannot at this time extend its control of its own relatively limited domestic reserves to those of Venezuela. This second real concern is intimately related to the first one, the new political culture of people’s power. Right from the initial mandate of Hugo Chávez, for the first time in the history of that country, the benefits of petroleum have been used for vastly improving all facets of Venezuelan life: economic, social, health, education, culture and sports. The concern of Obama is that the people at the base are generally aware of this, because they are involved in working out and applying the deviation of this source of income to their own benefit. The grass roots are very conscious of the source of the improvements to their daily life and see themselves as partners along with the leadership in executing the new programs. Thus both of Obama’s concerns are intimately linked.