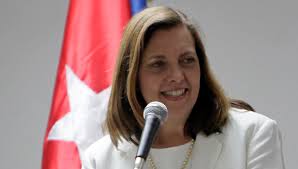 Press release issued by the Cuban delegation to the third round of talks on the re-establishment of diplomatic relations between Cuba and the United States. Washington D.C., May 22, 2015.

The third round of talks between delegations of Cuba and the United States on the process of re-establishment of diplomatic relations and the opening of embassies was held in Washington D.C., on May 21 and 22, 2015.

The Cuban representatives recognized the just decision adopted by President Obama to remove Cuba from the List of States Sponsors of Terrorism, in which Cuba would have never been.

These talks were held after the US government, in compliance with its international legal obligations under the Vienna Convention on Diplomatic Relations, issued a licence to one bank to resume the banking services to the Cuban Interests Section in Washington under the conditions of the financial blockade in force.

Both delegations agreed to continue the exchanges on aspects related to the functioning of the diplomatic missions.

During the talks, the Cuban delegation ratified its willingness to address substantial matters of the bilateral agenda, including the lifting of the embargo among others, which would make it possible to move on to the normalization of relations between Cuba and the United States on the basis of respect, sovereign equality and reciprocity, once diplomatic relations are re-established.

The meeting was held in a respectful and professional climate.