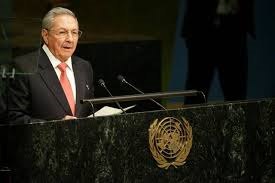 Remarks by Raúl Castro Ruz, President of the Councils of State and Ministers of the Republic of Cuba, in his address to the United Nations Session on “Global Leaders’ Meeting on Gender Equality and Women’s Empowerment: A Commitment to Action”.

Seventy years after the establishment of the United Nations Organization, one of whose foundational objectives was the struggle on inequality, discrimination against women stands as an embarrassing reality.

Forty years after the First World Conference on Women, and twenty years since the adoption of the Beijing Declaration and Action Program, one out of three women endures physical and sexual violence; 90% of the 2.5 million victims of human trafficking are female; unemployment is higher among women than men, and they receive an average of 60% to 70% of the men’s salary for the same work; millions of women do not enjoy equal rights with respect to inheritance and property; and, women representation in parliaments worldwide is of only 22%.

It becomes necessary to examine the problems they face in their permanent connection with conditions in the world today, where the pervasive influence of war, aggression and instability, underdevelopment and the global crisis aggravate their dramatic situation.

Nearly 90% of the current victims of war are civilians, most of them women and children, and the same applies to 75% of the people displaced by conflicts or seeking refuge. Women make up 70% of the 2.7 billion of the world poor, and two thirds of the nearly 800 million illiterate adults; more than 300 thousand women die every year of avoidable complications during childbirth, 99% of them in South countries.

Cuba, which was the first country to sign and the second to ratify the Convention on the Elimination of All Forms of Discrimination Against Woman, has achieved great progress toward the objectives that bring us together at this point.

Today, Cuban women’s life expectancy at birth if 80.45 years of age; direct maternal mortality rate is only 21.4 per one-hundred thousand live births, one of the lowest in the world; they make up 48% of the total number of people working in the state civil sector, and occupy 46% of senior leading positions.

They make up 78.5% of healthcare personnel, 48% of scientific researchers and 68.8% of the labor force with the highest technical and professional qualifications. Cuban women, in general, complete their 10th grade of schooling and represent 65.2% of higher education graduates. Additionally, 48.86% of Cuban Parliament members are women, which sets Cuba in second place among countries of the American hemisphere and fourth in the world.

Nevertheless, we still have much to do. We need to move forward in the modification of cultural patterns, and to make sharing family care by men and women a priority. This would help us to continue increasing the number of women in decision-making positions in the Government, just to mention some aspects.

We admit that some achievements have been scored in the past decades but they are fragile and insufficient. In order to advance toward the full realization of gender equality and the empowerment of women, it is necessary above all to have a more equitable and just international order that eradicates poverty and hunger, puts an end to conflicts, favors human beings above capital, and preserves the environment. But, political will is much needed to avoid turning the results obtained so far into our goals instead of making them a starting point and a pledge to achieve true equality for women.